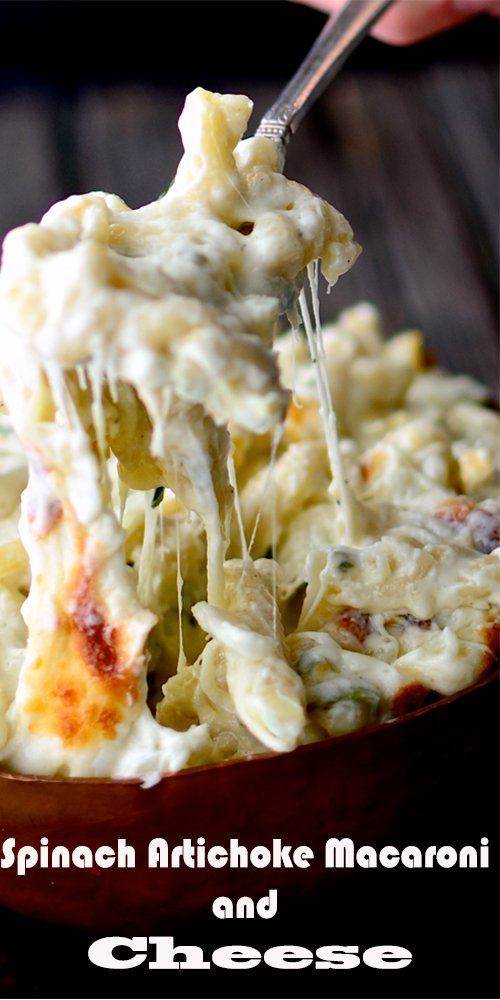 One day Spinach and Artichoke met at a salad kafe and Artichoke’s heart missed a beat. It was love, and they married the next day. But the two were so different. Other salad toppings were critical when Artichoke announced her pregnancy. What monster of a baby could arise from such a union?
Behold: Nine months later Macoroni and Cheese emerged! And by thunder, she was the most beautiful thing since blue cheese.

Well, as you might have guessed by now, this is not the familiar voice of Yammie. That is because this is not Yammie. But her sister, “Piggy”, as she has aptly named me, for I so enjoy her foods. Why am I writing her post for her? Well, I noticed she looked tired, she’s been busy today, and being the loving, selfless sister I am, I offered to write it for her.

As you see above, I have absolutely no idea how Spinach Artichoke Macoroni and Cheese was created. All I can tell you is that she tasted wonderful.

I don’t really have anything else to say about this. I don’t know what to say to convince you to make this dish and try it yourself. That’s why I’ve added my own personal touch to this post and made the pictures Scratch and Sniff. Just give your computer a scratch while you look at the pictures and you’ll get the full effect.