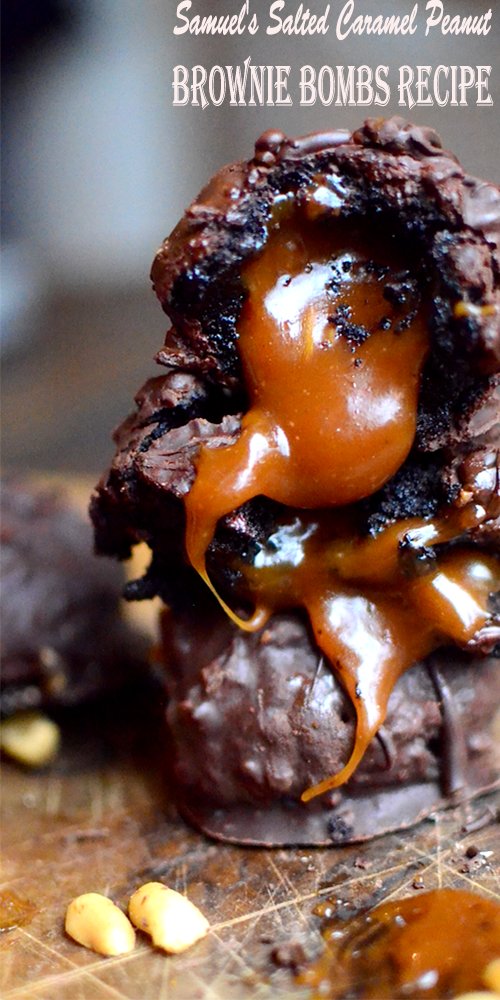 Well, Samuel is at it again. If you follow me on Instagram, you’ve seen lots of breads and bagels from Samuel before, but this time he has tried his hand at a dessert. I was pretty impressed. Especially because he even made them flourless so his poor, pregnant, gluten intolerant wife could partake.

Samuel actually made these a couple weeks after we found out I was pregnant, just around the time when the nausea started to strike.

“I’m never making a post ever again,” I said dejectedly, slamming my head down onto the dining room table.

Suddenly Samuel appeared nobly on the scene, “Never fear, I will make a post for you,” he said, apron flowing majestically around him.

He really didn’t even let me help at all. At least not until it came time to taking photos. He tried a few and got frustrated and then he handed me the camera and I got frustrated. February’s limited sunlight in Berlin is enough to make any photographer overturn tables and smash caramel brownie balls into the wall. Not that anything like that happened…

So anyway Samuel, if you’re reading this… I’ve been having sort of a weird pregnancy brain lately that makes it hard to make normal decisions in cooking sometimes. I’ve put so much yellow food coloring in a lemon cake that it looked like a highlighter and I’ve poured water onto crispy fried chicken. I’ve even  considered feeding you guacamole and chocolate cake for dinner.

So if you ever feel like coming the rescue again and whipping up some kind of chocolatey, caramely, amazing creation again… you’re more than welcome to. The sun is back in town too, so you might even want to try your hand at taking the photos this time… I mean, only if you want to…. sometime…

Seriously though, you should make these things. They’re awesome. So is Samuel.